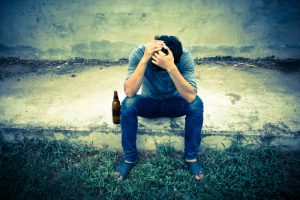 Research has shown that up to ten percent of depressed people also abuse alcohol. Many people abuse alcohol when depressed because it makes the sad feelings go away. However this is only a temporary “fix”. People abusing alcohol think they are treating their depression when in fact large amounts of alcohol can actually worsen the illness.

Depressed people do not realize that the more times they drink alcohol, the more they are increasing their tolerance levels to alcohol. This then requires even more alcohol to induce the same feelings of relative happiness that the first few drinks used to achieve. This is how alcohol can become addictive and gets to the abuse stage.

Unfortunately both depression and alcohol abuse are more common than ever before. While 10% of depressed people also abuse alcohol, up to 40% of alcohol abusers show signs of depression. These numbers are growing every day. These numbers keep growing as more and more people become addicted to alcohol and or become depressed due to the increasing levels of stress in today’s world.

Often the symptoms of alcohol abuse and depression can be interchanged. Both illnesses show changes in behavior such as becoming increasingly impulsive, increasing acts of violence and aggression, increasing isolating tendencies, and impaired judgment. Both illnesses can lead to problems in the marriage and result in the breakdown of the family. One must also be concerned with the fact that depressed people are more likely to cause accidents within the home. There is also an increased link between alcohol abuse, depression and suicide. This is really a cause for concern for these individuals.

Research also indicates that the abuse of alcohol can be genetic. Children of alcoholic parents are much more likely to suffer from alcoholism themselves. Their alcohol tolerance levels are much higher than the average child the same age. The same research indicates that alcohol abuse affects chemicals in the brain. These chemicals affect the way the brain processes information. Depression is also immediately inherited from parents to child, as well as from relatives.

Trying to determine if an individual is depressed, abusing alcohol or both is difficult. Many of the symptoms are the same for each illness. Insomnia, waking up frequently, poor appetite, sleepiness, and feelings of disorientation are symptoms of both illnesses. To complicate the situation, many people who abuse alcohol become depressed over time. Doctors will first treat the alcoholism and see if the person’s mood improves; if it does not then they will treat the depression.

Alcohol is in a set of drugs known as sedative hypnotics. Other drugs in this category are tranquilizers. Many depressed people, especially young adults, abuse other drugs as well as alcohol. Some of the antidepressant medications on the market today also contain a sedative. Thus if combined with alcohol, the person becomes severely sedated and can even stop breathing.

The danger of combining alcohol with drug treatment for depression is one doctors know well. This is why they tend to treat the alcoholism before the depression.

Seek Bewell or BridgeUP staff or check out our resource page if you or a loved one needs help with alcohol use and/or depression.