Myths of hypertension: Learn about sodium 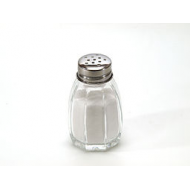 While adding a lot of table salt to your food is bad for you and can raise your blood pressure, the real bad actor is the sodium in the packaged food you buy and in meals from restaurants. Most people understand that junk food such as potato chips are high in sodium, but what people don’t realize is that there are many foods, which seem healthy, that are actually very high in sodium.

So what you might think is a healthy meal because of the nutritious ingredients, can actually be adding to your chances of getting hypertension (high blood pressure), or managing it if you already have it.

Another way to get way too much sodium without even realizing it is to eat out at restaurants. Most restaurant food is highly salted.

Alternative: Make grilled steak and shrimp at home with a side of vegetables. Add olive oil and garlic to the shrimp and vegetables instead of high sodium sauce. This dish can be prepared in less than half of the salt used in Weight Watchers Signature Sirloin with Garlic Herb Shrimp.

Deli Meat
Sliced deli meats and hot dogs are packed with sodium. One hot dog can contain up to 700 mg of sodium, while just one slice of regular deli ham can have over 300 mg.  Choose to cook fresh chicken or fish for a meal and make extra to have for lunch the next day instead of buying deli meats.

Chicken Breasts
With the increase in heart disease, many people have cut down on eating a lot of red meat. The choice people most often make is to substitute it with white meat, like chicken breasts. Many suppliers of pre-packaged chicken breasts inject the breasts with a high-sodium flavoring (salt water containing flavor enhancers) to make them taste better. To make sure you don’t get over-salted chicken breasts look for brands that say ‘no-salt’ or ‘non-enhanced’ on the label or switch to organic chicken.

Breads
According to the CDC, breads are a major source of salt in the normal American diet. Not only do the breads themselves contain salt but given that we top breads with things like ham, cheeses and spreads, all of which contain salt, it’s not surprising that eating bread adds significantly to our daily salt intake. A bagel, for instance, can contain as much as 460mg of salt (20% of the recommended daily intake) and that’s before anything is added. Again, the key is to read the labels and choose the ‘low-salt’ versions. If you’re ordering take-out, like a sandwich or bagel, choose toppings containing low salt.

Pizza
As with most fast foods, pizzas contain lots of salt. A 12oz frozen cheese pizza can contain over 2000mg of salt, almost the entire day’s recommended salt intake. Just two slices of pizza could have up to 800mg, or more than 30% of the recommended daily salt intake. This also depends on what topping you have on it. When buying pizza choose vegetarian toppings.

According to all health authorities, Americans eat too much sodium (salt). The CDC estimates that the average person consumes about 3400mg of salt a day, more than double the recommended amount for most people. The recommended daily intake is 2300mg per day, but for people suffering from hypertension it is 1500mg.