Why do we eat so much processed food? 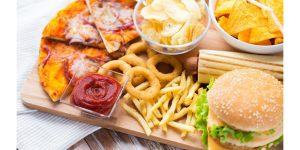 Eating a diet that does not have enough healthy vegetables and fruits causes a lot of health problems.  And, while unhealthy foods are often cheap to buy, they can be expensive to our health over the long run.

Why do Americans eat so many processed foods?

The Cost to You

By comparing the prices of 370 foods sold at supermarkets in and around Seattle, Washington, University of Washington researchers found that junk food costs A LOT less than fruits and vegetables. High-calorie munchies cost an average of $1.76 per 1,000 calories while low-calorie, but nutritious foods like many fruits and vegetables cost a whopping $18.16 per 1,000 calories.

What You Can Do

1)      Make your vote count. Let your elected officials know that you want healthy food in your community.

2)      Let your wallet do the talking. Buy healthier food options that you can afford-maybe you can’t completely change the way you shop or what you eat but you can take small steps. Gradually make small healthy changes to your diet that are more affordable like adding frozen vegetables instead of more expensive fresh veggies and buy fresh vegetables and fruits when they are in season. Even more, vegetables and fruits that are in season actually taste better!

One way to reach this goal is by using farmers’ markets during the spring, summer, and fall. The markets accept food stamps and WIC. Also, for every $5 spent at NYC Farmers Markets using SNAP on an EBT card, the NYC Department of Health and Mental Hygiene provides “Health Bucks,” which are worth $2.00 each and can be used to increase your spending power to purchase fresh fruits and vegetables.

3)      Organize. There are several groups in Harlem and the Bronx that are fighting to bring more supermarkets back into the community or stop them from closing and to increase the availability of fresh fruits and vegetables. Contact James Subudhi at WE ACT for Environmental Justice (West Harlem Environmental Action, Inc.), or Harlem community activist, Emma Jackson at EJCK1010@aol.com and others who are working to fight for food justice in Harlem, such as more and better supermarkets and healthy school food programs. You can also check out Manhattan Borough President Scott Stringer’s work with Foodprint and Harlem4, an organization interested in food issues.

Green Bronx Machine is an organization in the South Bronx that encourages school children to eat fruits and vegetables through classroom kitchens and teaching about urban farming. You can contact them at info@greenbronxmachine.org so that you or your student get involved. Just Food works to connect community members to local farmers to address food inequities in New York and they already have partners in the Bronx—Click this link to contact Just Food!

4)      Realize that in fighting against New Yorkers’ lack of access to fresh, healthy affordable food you will also be fighting against obesity which is the number one cause of death in America-and an even bigger problem here in Harlem and the Bronx!