My child is so moody…what’s going on and what should I do ? 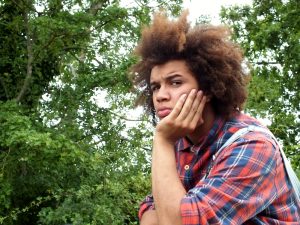 Almost all teenagers go through a period of moodiness, where they get cranky and irritable. Sometimes they withdraw and just prefer to be left alone. This is a normal part of development. For the majority of teens it will pass after a couple of years. Thankfully!

But what’s going on and how can parents and caregivers keep their cool in the meantime? Scroll down for more information…

Research shows that growing teens need 8-10 hours of sleep each night. However, many teens get less than that because they are  juggling afterschool activities (sports, clubs, work etc.) and homework. Also, many teens spend a lot of time playing video games and using social media (instagram, snapchat, facebook). In addition to the time drain, the light from the computer and cellphone screens can trick the brain into staying alert at a time when the brain should be winding down to prepare for a good nights sleep. Making things worse is the fact that many teens have to wake up extra early to get to school. Going to bed late and waking up early can create a sleep “debt” which contribute to mood changes. See our other articles about sleep.

Hormones are natural chemicals made by the body. During the teen years, certain hormones are released in increased amounts in order to help teens to grow and to mold their bodies to begin looking like adults. In addition to changing appearance, these hormones may also play a role in affecting emotions and behavior. Fortunately, these hormones will level off in time.

Changes in the brain

While the changes in a teen’s body are easy to see, there are also many changes going on inside the brain of a teenager. We now know that certain regions of the brain continue to be shaped and molded until the age of 25 and sometimes even later. In particular, the parts of the brain that controls emotions, judgement and impulses is still undergoing construction during the teen years. We have all heard about the advices to “count to ten” before you say or do something that may have consequences which you may regret. Some teens have  difficulty doing this until they gradually mature. Until their “filters” are in place, they may say or act on the first thing that pops in their head which may create tensions within the family.

Teens slowly become more self-aware as teenagers. They are trying to better understand the world around them and their place in that world. They are processing all the new information that is coming and what it means, and how they should respond. As they grow and mature, they need time to reflect and consolidate all their experiences. To do this, they may want to spend time alone. While it appears to family that they just don’t want to be involved, in reality, they just need to take “a beat” or a moment to exhale and think.

Impact on parents and caregivers

Dealing with a moody teenager can be frustrating. Where did my sweet, kind, considerate, loving child go? And, who is this crabby, sullen, disagreeable person that took their place?

Part of normal adolescent development is to begin separating from parents in order to figure who they are as independent individuals. That process can be uncomfortable for everyone involved, and it may last for years. However, gradually, older teens and young adults begin to realize how “smart” their parents and caregivers are and a new and evolved relationship is formed which is based on mutual respect and admiration.

In the interim, parents and caregivers have to “tread water” and realize that things will get better. To be honest, even if they say so, teens don’t want you to disappear. They really do need and welcome limit-setting and guidance as they continue on their pathway towards adulthood. So try to keep the “big picture” in mind. You have every right to disagree with your teen, and to assert the need for manners and appropriate behavior. But, as much as possible, try to remain calm. Arguments can quickly escalate and become counterproductive which can damage long term relationships.

How should I deal with my teen?

You can give your teen space to grow and to be more independent while at the same time maintaining mutual respect at home. A good way to do this is to set boundaries and standards for communication, and to involve your teen in the conversation. By coming to a mutual agreement on what constitutes respectful interaction, you can validate your teen’s newfound sense of maturity. Additionally, while teens need time alone, you may want to set expectations for family time…such as regular family meals, or game or movie nights, or regular attendance at church or mosques. Your teen is also more likely to follow the rules you set together versus rules you set independently.

Professionals who work with adolescents on a regular basis, such as your teen’s guidance counselor, are also valuable resources. Also, your teen’s pediatrician can be helpful. You can talk with parents to navigate difficult situations and also go to them for support and suggestions that may be helpful at home. BeWell has established a Parent Board which holds regular meetings with parents. To get more information, contact Kristen Rosenthal, BeWell Program coordinator at: 646-284-9730 or krr2128@cumc.columbia.edu

At the end of the day, being proactive and using the resources available to you is the key to helping your teen develop into a healthy adult, and to keeping yourself sane in the process. With the right support you can make sure both you and your teen are on a good path for the future.

How do I know if moodiness is a sign of something else?

While some degree of moodiness can be normal, changes in your teen’s behavior that are extreme or that last for a long time could be symptoms of depression, which can require evaluation and intervention. 1 in 5 children experience depression during their teenage years, but because the signs of depression in teens can be confused with moodiness, about 50% of teens go undiagnosed.

Signs of depression in teens include significant changes in eating or sleep patterns, problems in school, low mood and self esteem, acting out, aggression, and substance abuse. In severe cases your teen may have suicidal thoughts. If you observe symptoms of depression in your teen it is important to talk to your pediatrician sooner rather than later, especially if your son or daughter is having thoughts of hurting him or herself.

BeWell staff members are also here to help and to provide support. They can give additional advice on dealing with teens and can connect you to counseling or medical care for your son or daughter if you do not have a regular pediatrician. Contact Kristen Rosenthal, BeWell Program coordinator at: 646-284-9730 or krr2128@cumc.columbia.edu if you need help or guidance.